Patient Engagement in the Digital Age: The Impact of Digital Therapeutics in Oncology Care
Kristin Siyahian
Deborah Toppmeyer, MD, and Jacquelyn Lauria, RN, MSN, of Rutgers CINJ, and Bob Gold of GoMo Health talk about the impact of Concierge Care at CINJ. This is their story.
Read More

Inherited Ovarian Cancer: What Have We Learned?

Compared with other cancers, ovarian cancer is relatively rare, accounting for just 1.3% of all new cancer cases in the United States. However, it has a high death rate—the highest of any female reproductive system cancer. Only around 1 in 7 women with ovarian cancer are diagnosed at the local stage. For these women, the 5-year survival is optimistic at 92%. However, most women present with advanced disease, for which the overall 5-year survival is estimated to be 45%.1 The low survival rate is primarily due to the inability to detect ovarian cancer at an early, curable stage. Whereas the average woman has approximately a 1.5% chance of developing ovarian cancer in her lifetime, a high-risk woman with a BRCA mutation may have anywhere from a 15% to a 68% lifetime risk.2

Screening options for ovarian cancer are extremely limited, and, to date, there are no proven effective surveillance strategies. Both the US Preventive Services Task Force and the American College of Obstetricians and Gynecologists recommend against ovarian cancer screening in the general population.3 For women at high risk who have elected not to proceed with risk-reducing surgery, transvaginal ultrasound with CA-125 levels can be considered every 6 months beginning at age 30 years or 5 to 10 years earlier than the youngest age of ovarian cancer diagnosis in the family.4 Even in this population, however, available surveillance options have not been shown to decrease ovarian cancer morbidity or mortality.3 In fact, it has been suggested that providing women with the option of surveillance for ovarian cancer gives them false hope, and when surveillance is not offered, they are more likely to proceed with risk-reducing surgery.5

Although bilateral salpingo-oophorectomy is a proven ovarian cancer prevention strategy, it is also an invasive procedure, affects quality of life, and may have health hazards. Additionally, for bilateral salpingo-oophorectomy to be effective in high-risk women, they have to be identified, and the majority of women with inherited mutations do not know they have them.6 Moreover, as only 7% to 10% of ovarian cancer cases occur in mutation carriers, this would not be an effective public health strategy to reduce ovarian cancer mortality and morbidity.3 Therefore, additional surveillance and prevention options are needed. 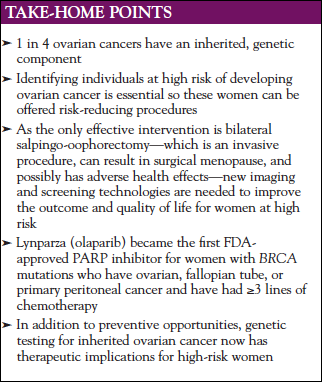 Data have demonstrated that at least some high-grade serous carcinomas originate in the fallopian tube. Therefore, one suggestion is the option of bilateral salpingectomy in premenopausal, high-risk women and for all women at the time of routine gynecologic surgery.3 However, to determine the impact of this procedure in preventing ovarian cancer, the proportion of cancers arising in the fallopian tubes would need to be known. It would also need to be determined if there is a genotypic correlation, so that individuals receive appropriate genetic counseling. Presently, the only proven intervention is bilateral salpingo-oophorectomy. It is essential that new screening and imaging technologies be developed to improve the outcome and quality of life for women at high risk for ovarian cancer.

Due to the high mortality rate and lack of effective surveillance methods, identifying women at increased risk for ovarian cancer is crucial, as it allows them to have the option of risk-reducing surgery. Historically, it was believed that 5% to 12% of invasive ovarian carcinomas were due to hereditary susceptibility.7 The 2 most common hereditary ovarian cancer syndromes were believed to be hereditary breast and ovarian cancer (HBOC) syndrome and Lynch syndrome. HBOC is associated with mutations in the BRCA1 and BRCA2 genes, whereas Lynch syndrome is associated with mutations in the MLH1, MSH2, MSH6, PMS2, and EPCAM genes. As has been seen with other disease sites, the availability of multigene inherited cancer tests and their incorporation into clinical practice has altered the understanding of hereditary cancer, and this is also true for ovarian cancer.

Studies continue to demonstrate that BRCA1/2 account for the majority of known inherited epithelial ovarian cancer cases. However, multigene testing options have demonstrated that the remaining identifiable mutations represent a diverse spectrum, with Lynch syndrome typically representing a small percentage of known mutations. This was initially demonstrated in 2011 by Walsh and colleagues, who screened an unselected cohort of 360 women with primary ovarian, peritoneal, or fallopian tube carcinoma for mutations in 21 genes.8 Approximately 1 in 4 (82 of 360) women were found to carry a germline, loss-of-function mutation, and a total of 85 mutations were identified. BRCA1/2 represented 74% of mutations, whereas mutations in genes associated with Lynch syndrome only represented 2% of mutations. The remaining 24% of mutations were found in 9 genes, with the greatest proportion being CHEK2 (5 of 85) and BRIP1 (4 of 85). Since this study was undertaken, several others have reported on the results of inherited cancer panels in specific patient populations. The cohorts analyzed have included those that have particular age of onset and/or family history criteria, those that meet defined clinical criteria, and patient samples submitted to a specific genetic testing company.9

A laboratory cohort presented at the 2014 meeting of the American Society of Clinical Oncology reviewed the mutation spectrum of 263 patients diagnosed with ovarian cancer who were tested with a 25-gene inherited cancer panel. Again, BRCA1/2 accounted for over half the mutations identified (59.6%), and mutations in genes associated with Lynch syndrome represented 5.8%. The remaining 35% of mutations were represented by 8 genes, with the most mutations being identified in ATM, BRIP1, and NBN.10 A cohort from a different laboratory analyzed data for the contribution of 19 genes in a BRCA1/2-negative population of 911 patients with a personal history of breast and/or ovarian cancer. When the patients with breast cancer only were removed from the data set, 558 patients remained (466 with a personal history of ovarian cancer and 92 with a personal history of breast and ovarian cancer). In 41 of these individuals, 42 mutations were found. Unlike the other reported data sets, the most mutations were found to be in the Lynch syndrome genes, followed by BRIP1, CHEK2, and ATM. The common theme in all of these data sets is that a variety of genes have a role in ovarian cancer risk, and simply testing for BRCA1/2 or Lynch syndrome will miss a large percentage of cases.

Ovarian cancers that have impaired HR ability are more sensitive to poly (ADP-ribose) polymerase, or PARP, inhibitors. PARP inhibitors keep cells from repairing themselves once they have been damaged by chemotherapy.12 Individuals with BRCA mutations start off with cells prone to problems repairing DNA, and PARP inhibitors make it even more difficult for tumor cells to correct themselves. Knowledge of the molecular mechanisms of BRCA1/2 has now permitted therapeutic interventions. On December 19, 2014, the FDA announced the approval of the first PARP inhibitor, Lynparza (olaparib), for patients with germline BRCA1/2 mutations and ovarian cancer who have had 3 or more lines of chemotherapy.13 Additional studies are needed to determine if the use of PARP inhibitors would be beneficial in other genes in the BRCA pathway or in other cancer sites.