The Power of Navigation: A Case Presentation

In early fall 2016, I was referred to a newly diagnosed breast cancer patient I will call “Teresa.” Teresa is a retired professional in her early 60s; she is divorced. She apologetically divulged to me that she had felt a breast mass for nearly a year. She explained that the delay in seeking medical treatment revolved around the fact that she had been the sole caretaker for her elderly mother. Her mother had been very ill for the past year and had recently passed away. Teresa also told me that she has sole custody of her grandchildren, aged 4, 5, and 8 years. Teresa’s days are very busy managing their care, so she chose to wait until their return to school to seek medical attention for the lump in her breast.

Teresa and I spoke over the phone; our relationship was very good. I provided her with educational materials, and we discussed these in depth. Her affinity for detail was evident in comprehending the complexity of her case. She explained that she had little support and few close friends, but she had become close to a woman I will refer to as “Jenny” from her church. Jenny had developed a special relationship with Teresa through weekly Bible study at Teresa’s home.

I accompanied Teresa to the initial visit with the medical and radiation oncologist; Jenny also came to offer support. Teresa was informed that she would require neoadjuvant therapy, news that was very unsettling in light of her home situation. She would require support for her grandchildren, and we discussed options for assistance. Jenny rallied some members of the church community to offer assistance with meals, cleaning, and childcare if needed. The 1-hour commute to the medical oncologist could be a barrier while undergoing treatment.

Teresa began her chemotherapy in October. Jenny accompanied her to each visit. Teresa tolerated treatments relatively well; fatigue was her primary complaint. Managing the children was sometimes challenging. I met Teresa and Jenny at a few appointments, just to offer support and listen. In early December, I lost touch with Teresa. She was not answering or returning phone calls. I discussed this with the nurse navigator at the cancer center, learning that the end date for Teresa’s chemotherapy was near. I was told she had a follow-up appointment with the oncologist in early January. I placed that date on the calendar in an effort to visit Teresa, because I was concerned about her lack of responsiveness to my calls.

On the appointment date, I went to the cancer center and waited for Teresa. She never arrived for the visit. I called her home and received no answer but left a message for her to return my call. The next week at my meeting with the cancer center nurse navigator, I explained that Teresa was not at the appointment and expressed my concern. She had not kept her appointment, and she had not rescheduled. By this time, Teresa should have scheduled follow-up scans to evaluate chemo response and an appointment with her surgeon. The nurse navigator and I decided I should reach out to Teresa again in an attempt to lend support.

I called Teresa that day, and she answered the phone after several rings. We exchanged cordial conversation for several minutes, discussing the children and their activities. I finally mentioned that I had missed her at the appointment with the oncologist. After a silence, Teresa told me that she had been severely depressed for quite some time. In fact, she had a long history of clinical depression and had stopped taking her antidepressants during her mother’s illness. She confided that she did not come to the appointment that day because she simply “could not get out of bed.” Her appetite was poor, and she was not sleeping well. She knew she needed the appointments to complete the treatment plan but “could not pick up the phone to call.” We discussed her needs and how we could help. I told her I would speak with the nurse practitioner to coordinate her care.

I met Teresa at her mammography appointment; Jenny accompanied her. Teresa appeared tired and shaken. I asked if she had started antidepressants, and she stated that she could not remember the names of the drugs she used in the past and had told the nurse practitioner she would follow up regarding the drugs. I asked Teresa to complete the National Comprehensive Cancer Network Distress Tool. She rated her distress level a “10,” citing her main problems as treatment decisions, dealing with children, depression, fears, nervousness, sadness, worry, loss of interest in usual activities, sleep, and pain. As we drilled down on each problem, I realized just how fragile she was. Teresa had also put her pet to sleep in the past week.

Recognizing Teresa required an immediate intervention, I visited the nurse practitioner at the cancer center next door while Teresa was having her mammogram. The nurse practitioner stated how much she cared for this patient and offered to walk over to the imaging center to discuss how we could help her through this time. With her friend, Jenny, we all listened to Teresa’s concerns. A plan was put in place while we had Teresa with us. A prescription was called in to her pharmacy for an antidepressant that had been effective in the past. I worked with her insurer to get preauthorization from the nurse practitioner. An appointment with the counseling service was made. Teresa felt cared for and grateful as they left the center.

Today, Teresa has successfully recovered from surgery. The antidepressants have helped lift her spirits, in conjunction with counseling. She now has the strength to care for the children and continue her Bible studies with her friend, Jenny. I am so inspired by Teresa’s resolve and fortitude in light of the challenges she has faced. Her story exemplifies the power of navigation in collaboration with the patient, caregivers, and care team. In the words of Helen Keller, “Alone we can do so little, together we can do so much.”

Related Articles
Tales from a Navigator: “Can You Navigate Our Horses Out of the Parking Lot?”
September 2021 Vol 12, No 9
On a daily basis, navigators are asked to provide many varied, and sometimes very novel, services for their patients, according to Penny Daugherty, RN, MS, OCN, ONN-CG, an oncology nurse navigator at the Northside Hospital Cancer Institute in Atlanta.
AONN+ Annual Conference Monograph: A Study of Key Sessions
Meg Barbor, MPH
|
May 2021 Vol 12, No 5
At the recent AONN+ Annual Conference, experts in oncology navigation convened virtually with conference attendees to offer their insights in furthering the efficacy of navigation. This monograph will review the proceedings from 4 key sessions covering the timely topics of telehealth, mental health and the oncology patient, prehabilitation and rehabilitation, and value-based oncology care.
Defining the Role of the Oncology Nurse Navigator
Lindsey M. Reed, BSN, RN, OCN, ONN-CG, Kristina Rua, MSN, RN, OCN, ONN-CG
|
March 2020 Vol 11, No 3
Understanding your role (and setting boundaries) allows you to remain focused on the tenets of oncology navigation—providing compassionate patient-centered care.
Last modified: April 23, 2021 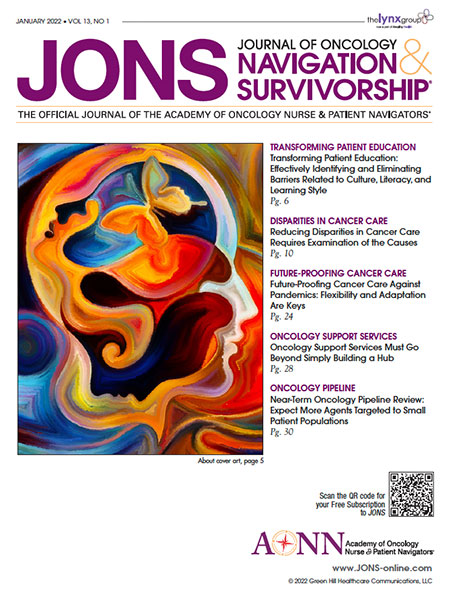